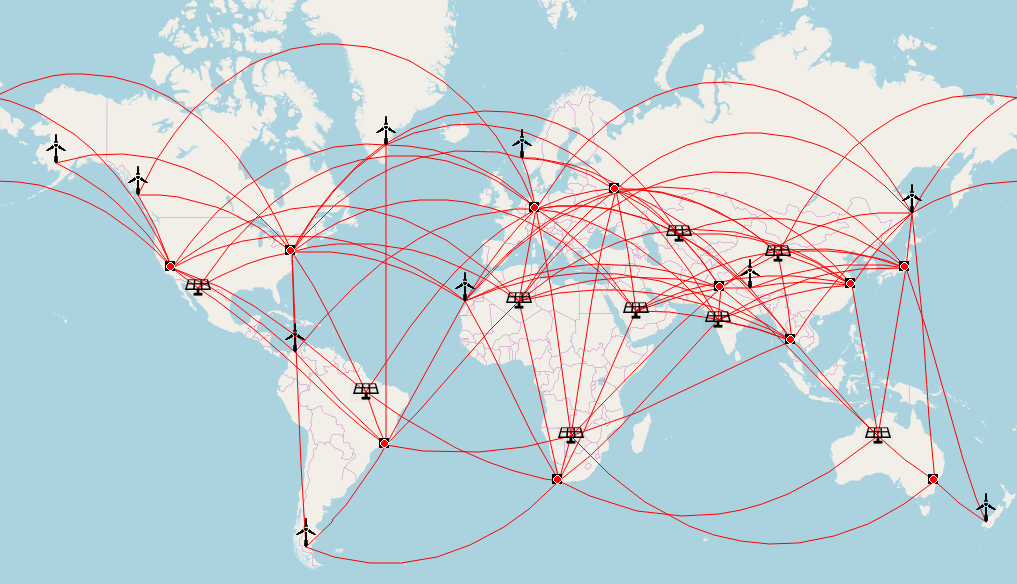 Wind and sun are not always available in one specific place. But there could be a solution: Low loss long distance power grids. Europe could get solar power in the morning from Asia, at noon from the Sahara, in the evening from the Americas. In this illustration PV and wind symbols have been placed at a few locations with a high potential. But distrubution and paths have yet to be worked out. Map by OSM

It could be as simple as this. Substitute fossil fuels with low carbon energy.
But the dimension of the a global energy transition is rarely debated. We must speed up rapidly, dramatically with the installations. It is very unlikely that we get there by 2040. And even that would probably be too late.
The good news: The technology is available and affordfable today, in contrast to many other approaches. Fossil fuels account for about 70% of the greenhouse gas emissions. The mass deployment of wind power, PV and a supergrid in combination with some storage technique seem to be the last chance to avoid the irreversible impacts of a global warming. This will not stop the process but eventually slow it down. And it has a positive side-effect: Wind, sun and also hydro energy will last forever. This site contains some background and estimations about quantities and magnitudes of a global energy transition.

The countdown is running: If emissions do not drop, the carbon budget for 1.5°C will be exhausted in 2028 according to the IPCC Special Report SR15 (p.96) The rise in temperature to that level would happen with some delay between 2030 and 2052 (p.66). 1.5°C is indicated as a critical point after which global warming could become irreversible and uncontrollable. Even if it was possible to achieve negative emissions in the future, 1.5°C must not be exceeded at any time to avoid the loss of ecosystems. The consequence: Radical emission cuts are required immediately. We are on the brink.

Slowing down is just too little if you rush towards the cliff !

Leave it in the ground !

Coal, oil and gas exploiters have never paid for the damage they cause. It's time to start with high carbon pricing above 200$/t per CO2 equivalent. Not many other regulations are required. With carbon tax or a tight concept of carbon certificates, large scale investments into renewable energies will start all by themselves. Wind and solar already outbeat coal, oil and gas in hours where they are available. But still, grids and storage is needed for a 24/7 supply. This needs a little boost. Competitiveness is the key to a global energy transition. The amount of Emission certificates must be limited to the carbon budget for 1,5° for all time with no exeption and include all sectors globally. This would be more diffult to manage than a simple carbon tax. Renewable energy needs fair market conditions, power net access and international cooperation. The transition to 100% renewable energy would probably be cheaper than the trillions yet to spend on oil, gas and coal. Once installed, operation costs for wind and solar are low - a long term benefit for society.

0.0169 US$ per KWh is much less than any fossil fuel. And the price is dropping. In remote areas, there is much space for solar PV and wind plants. Installation is possible without any resitance by local residents and the land is cheap.

Coming to a solution

By the way... once installed, there is no ecological need to save energy anymore

Fossil reserves are limited. A transition to renewable energy must happen sooner or later. These investments cannot be avoided. The only question is when. Companies involved in coal, gas and oil exploitation are interested to slow down the process. They want their gains for a few more years. The money spent on fossil fuel is lost to the public. So even without climate change it would be wise to push forward a global energy transition.
It is illusionary to hope for any change of habits. The world population wants energy. The global energy demand increases by 2 - 3 % per year. The only possible answer is a massive installation of wind and solar power in remote areas. Renewables can compete already now.

Can a change in lifestyle be the solution?

The debate about climate change is often dominated by appeals to avoid air travel, meat and plastic. Even if a significant proportion of the world's wealthy population changes their habits, this would only reduce global emissions by a few percent. There is no alternative to replace fossil energies with wind, sun and hydro.


In depth: Climate change and energy transition
In a nutshell: Brief basic knowledge